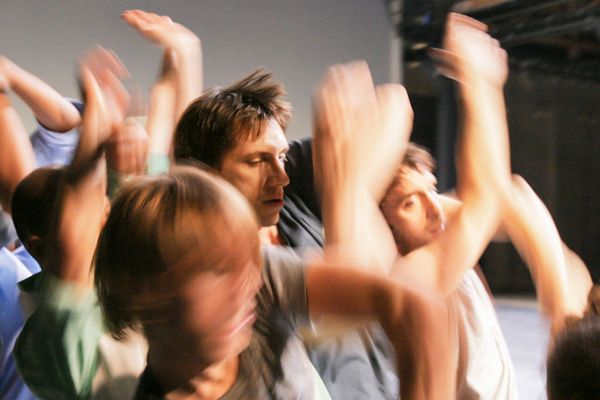 For years I have included a footnote or an epilogue in my publications in which I speculated about the possibility of improvising robots. In theory any of my dance improvisation techniques can be implemented in robotics or a three dimensional avatar. They are rooted in the properties of the motor system. If a human "agent" can learn them, then so can an artificial agent. At least, in principle. At the moment there is still a wide gap between theory and practice, in part because it is not yet fully understood how the human brain learns and controls movement.

I am no stranger to artificial intelligence. In the early 90s when I was at university, neural networks were all the rage. For one course I implemented the back propagation algorithm, which is still at the heart of current deep learning algorithms, in an effort to model the stock market. Unfortunately, at the time data were sparse and computers were slow and even simple simulations would take hours to complete. Often I would run my simulations overnight, only to find out the next morning that there was an error in my code. Not much has changed in that respect, as researchers' ambitions grow in line with computing power.

In 2001, when I was a visiting artist/scientist at the University of Southern California I made a feeble attempt to implement some of my improvisation techniques on an avatar. But nothing came of it. Largely for lack of trying, because I quickly discovered that the technology wasn't ready yet for my ideas.

Recent years have seen a dramatic increase in computer capacity and data availability. At the turn of the century self-driving cars were the stuff of science fiction, now they are driving the streets of Silicon Valley. Humanoid robots, too, are becoming increasingly sophisticated and one can only imagine what they will be capable of ten or twenty years from now.

The technological advances of the past few years have breathed new life into my dream of creating a robot or an avatar capable of creating a sequence of movements.

To be sure, recent advances notwithstanding, the field of AI is still in its infancy. It is also unclear how much of recent progress is due to advances in computing power and how much to fundamental breakthroughs. Much of the current excitement in AI boils down to a technique called deep learning, which can be traced back to an idea first published in 1986 (the back propagation algorithm that I also toyed with). So it will take some time before autonomous dancing robots will take over.

Ongoing advances in AI will also have profound implications for how we think about art and creativity in general and dance and choreography in particular. What does it mean for how we look at dance in general and dance improvisation in particular if a robot were to improvise? Most people would consider improvisation a creative act. But if a robot were to improvise would that mean that the robot is creative? And if one doesn’t consider the robot itself creative, but for example its developers, why would one consider a human dancer creative? Only because he or she is human?