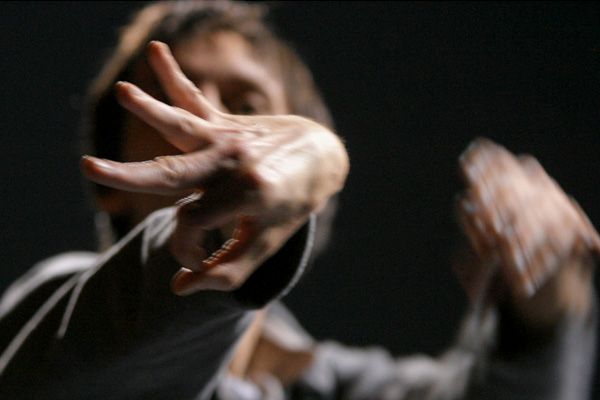 To facilitate the real-time composition of movement sequences dancers and choreographers have developed numerous dance improvisation techniques from simple behavioural tasks, such as drawing imaginary figures with different parts of the body, to problem solving tasks that require one to translate a word or a phrase into movement, such as separate the wheat from the chaff, make angels out of devils, spicy and water.

A key difference between these techniques and other approaches to dance improvisation is that these techniques involve the exercise of one’s cognitive capacities. In contact improvisation, for example, the impetus for a movement is physical and may originate in the pull of another dancer or the removal of support.

In what I have termed cognitive dance improvisation the movements are typically determined by rules, techniques or directives. The dancers are required to know and to be able to explain what they do. Ideally, different observers should be able to agree on whether a task has been accomplished and different dancers should arrive at comparable results.

My research is motivated by the observation that, when freely improvising or just dancing around dancers often get stuck. Habits, mannerisms and various kinds of behavioural predispositions may lead one to unconsciously make the same choices and fall back into a pattern. I should add that there is nothing intrinsically ‘bad’ about a motor pattern. It can also be evidence of a personal style. A pattern is ‘bad’ when you are unaware that you tend to make the same choices in certain situations and are unable to avoid making the same movement choices.

I have sought to gain a better understanding of this phenomenon and to come up with some ideas on how to avoid it.

Unconscious motor patterns are a property of the motor system. Think of folding your arms, getting dressed in a particular order, brushing your teeth and so on. Similarly a dancer may have a standard way of getting up from the floor. Patterns also occur as a corollary or byproduct of one's body posture and body configuration during the execution of a movement sequence. Think of what to do with the hands, the head, the arms etc. when you're moving another part of the body.

Recent advances in neuroscience have greatly enhanced our understanding of how new movements are learned and how habits are formed, although perhaps it is better to say that scientists are becoming ever better in describing the many problems that are not yet understood, since nearly every experiment raises new questions about the structure and function of the central nervous system. Neuroscientists have also begun to explore the roots of creativity. Together these advances offer a new window into dance improvisation.

Inspired by my readings into the neural mechanisms of human movement and by the work of the American choreographer William Forsythe, I have developed various methods for generating movements and defining a sequential and/or hierarchical structure within a sequence of movements, which draw on the implicit properties of the motor system and the 'motor schemas' that constitute our action repertoire.

If we could make the implicit rules that guide our behaviour explicit we could attain a new, higher degree of freedom: what was unconscious has now become a conscious choice. For example, a default property can be seen as a specific instance of a range of movements, while a solution to a particular behavioural problem can be generalised to other body configurations.

Hagendoorn, I.G. (2019). An Agile Mind in an Agile Body. In: Midgelow, V.L. [ed.], The Oxford Handbook of Improvisation in Dance. Oxford University Press.

Proposition 5.2 as well as Proposition 3.1 and Proposition 4.1212 are good examples of my approach to dance improvisation. I've uploaded different "iterations" as I like to call them of the same piece so you can see that it is improvised but that the choreographic material is the same.